The Intel® Compute Card introduces a revolutionary shift in the way “PCs” are understood and used.
This entry is the first post in a series of three on the ion Server Blog which will explore some of the possibilities of ion‘s microPC. Intel envisions the use of Compute Card mostly in all-in-one computers, kiosks, and smart appliances, but its flexibility broadens its appeal. In this post we will discuss the paradigm of a user who needs a computer at work and at home, who prefer that they are the same PC but does not want to carry around a laptop: One microPC with multiple docks for use in multiple places. 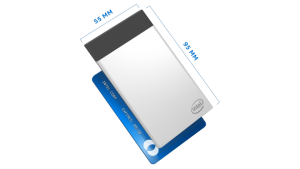 The Compute Card is a tiny PC which includes processor, RAM, storage, WiFI and Bluetooth in a tiny package slightly longer than a credit card, 5mm thick and weighing 44.5g or less than 2 ounces. ion offers the range of Intel Compute Cards in its microPC family. Current choices include models based on Intel® Celeron® processor, Intel® Pentium® Processor, Intel® Core™ m3 processor and Intel® Core™ i5 processor. All models include 4GB RAM and storage is either 64GB or 128GB of solid state storage.

For most people working today, there is a need for a computer at work. A growing number of those people also need, sometimes, to work on that computer from home. Actual travel though is not part of the job for most of those people, so a laptop is a big item to carry around which they do not actually need. Instead, envision an ion microPC that easily fits in a shirt pocket or purse and can move from a dock at work to a dock at home. For convenience, each dock would have its own display or displays, keyboard and mouse, and maybe a wired network connection.

It is little and it might get lost? A simple BIOS password takes care of most of those issues. If higher level security is needed, then perhaps this is not the right solution.

The internal storage is less than I need? It is easy to connect one or more external, USB attached drives to the dock. For reliable storage, that should be an SSD or network attached redundant storage. And if that storage needs to travel with the Compute Card, an external drive will fit in the same shirt pocket as the Compute Card.

What about security and revision management? The microPC is just a PC, so just about any approach being used on bigger computers will still work here. And if vPRO technology is part of that solution, the Compute Card based on Intel Core i5 processor includes vPro™ Technology. If the whole thing needs to be reloaded, pop the Compute Card in a dock in the IT department and reload it? – no need to carry a big computer there or have someone from IT sitting at the user’s desk for half of the day. Maybe the user just gets a different, freshly loaded microPC and the one that had been in use goes back to IT for re-install.

Read the rest of the series: